The letter reads in part:

“We write to express and reiterate our concern regarding the delayed release of the more than 10,000 remaining partially redacted or entirely withheld documents related to the assassination of President John F. Kennedy. We urge you to release all remaining documents related to President Kennedy’s assassination pursuant to and in accordance with the President John F. Kennedy Assassination Records Collection Act of 1992, also known as the ‘JFK Act.’

“The assassination of President John F. Kennedy was among the greatest tragedies in our nation’s history, however, nearly 60 years after that horrific day, the American people are still waiting for the government to fulfill its promise to release the remaining relevant documents. Congress unanimously enacted the JFK Act in 1992 to establish a presumption for immediate disclosure of documents related to the assassination. The purpose of such a law was to restore the public’s trust in government and prevent the spread of conspiracy theories bolstered by secrecy. Fostering transparency and facilitating public scrutiny of the remaining records relating to President Kennedy’s assassination is crucial…

“It is our hope that you take this opportunity to exercise the authority vested in you to restore public trust in our government by promoting transparency. We have waited for well over 50 years for the release of these documents, and time is of the essence.”

In support of the JFK Records Act of 1992, an independent agency – the Assassination Records Review Board – was formed, with the charter of locating and bringing into the national archives materials pertinent to the assassination of President John Kennedy. While the Board’s primary focus was on unreleased government documents, it operated under the premise that assassination materials included both public and private materials – regardless of how they were labeled – which described, reported on, or interpreted the activities of persons or events related to the assassination itself as well as to subsequent inquiries.

The Board and its staff began work in October, 1994 and operated for four years. As part of its activities, Board staff held regional meetings to identify new sources of JFK materials, in particular those which might be held outside the primary agencies involved in the initial Warren Commission inquiry. Going beyond documents and written materials, its staff took testimony from individuals felt to hold relevant information – primarily from those with firsthand knowledge of events related to the assassination. Due to media visibility over the JFK Records Act and the Board’s public meetings and work, a number of individuals privately contacted the Board with information they felt to be relevant to the Kennedy assassination. [ i ] 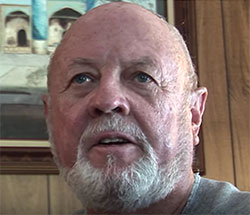 One of those individuals, Gene Wheaton, approached the ARRB with a fax to its chairman John Tunheim on October 20, 1995. Wheaton indicated that he felt he might have information relevant to the Board’s work. As part of that contact Wheaton provided a four page biography of himself, as well as a letter of commendation from President Richard Nixon for Wheaton’s earlier anti-drug work during an assignment in Iran. Wheaton’s career experience was in law enforcement and security operations, initially with police work and then service with both the Air Force Office of Special (criminal) investigations and with the Army Counter Intelligence Division (criminal and narcotics investigations). Following military service he had obtained his Bachelors Degree in law enforcement, and a Masters Degree in Public Administration. After obtaining his Masters he had moved into security consulting in the Middle East, working in Saudi Arabia, in Egypt (security design for the Cairo Airport) and as an advisor on security, police practices and anti-terrorism to the government of Iran. His work on counter-drug activities with Iranian law enforcement resulted in a special commendation from President Richard Nixon.

While in Iran he also worked as Director of Security for Rockwell International on its IBEX program, a project involving both photographic and communications intelligence surveillance and intelligence collections. [ ii ] Following his IBEX assignment, Wheaton did security consulting work with Iran, Egypt, Pakistan and Saudi Arabia; his assignments included working for Bechtel Corporation in the development of the huge Jeddah airport project. Wheaton’s biographical data – which has been confirmed – was impressive, not only in respect to law enforcement, but in terms of his experience in intelligence and security practices. 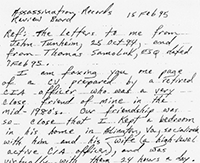 In response to his initial outreach to the ARRB, Wheaton was sent a standard form letter signed by John Tunheim, the ARRB Chairman, thanking him for his interest and advising a staff member would be in touch with him. A follow-up letter was sent to Wheaton by ARRB staff member Thomas Samoluk in early February 1995, and Wheaton responded in a two-page written fax, accompanied by a CV of the individual whom he wanted to offer as a potential source of information on the assassination. He noted that the individual had worked for him in the mid-1980s, and had been a close personal friend at that time. The individual had an earlier career as a senior CIA paramilitary officer (his wife was also a high level CIA employee). He had worked as an operations officer on the CIA’s Cuba project as well as in follow-on anti-Castro activities – his work had involved infiltrations, sabotage and assassination. While working for Wheaton in air transportation/logistics sales related to the Nicaraguan Contra effort, the individual had introduced Wheaton to Cuban and American veterans of the CIA’s anti-Castro operations.

Wheaton’s two-page fax stated that the conversations he had heard suggested that the former CIA officer and one of his key Cuban operatives had knowledge of a conspiracy against JFK and of individuals involved in the murder of President Kennedy. When Wheaton had first become aware of that information, he offered to work with the two men to arrange for Congressional immunity for their information – they had adamantly rejected that idea. At that point Wheaton was not sharing the identity of the CIA officer with the ARRB, instead he requested a personal meeting to discuss his information.

Continue reading this important article at The Mary Ferrell Foundation