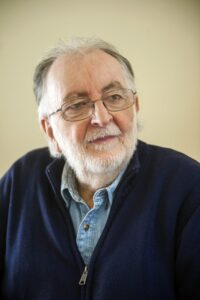 Malcolm Blunt is an independent investigator of the truth with an unbiased instinct for what is important and what is not in the details of President Kennedy’s assassination. He is regarded within the assassination research community as an esteemed authority on the CIA and the JFK records held at the National Archives and Records Administration in College Park, MD. He is the 1998 recipient of JFK Lancer’s New Frontier Award In appreciation for his contribution of new evidence in furthering the study of the assassination of President John F. Kennedy. He currently sits on the Board of Directors of the AARC.  In November of 2020 he became of the subject of a new book featuring 10 transcribed conversations with AARC Executive Director, Alan Dale titled The Devil is in the Details.

This ongoing project was initiated by Bart Kamp of DPUK during the Spring of 2019. His Herculean efforts to identify, transport, scan, upload and catalog audio, video and paper documents, some of which have never been otherwise available online, represents a major contribution to Cold War historians and the JFK research community.

With appreciation to Malcolm Blunt, Jim Lesar of the AARC, Rex Bradford of Mary Ferrell Foundation, and Bart Kamp for indefatigable dedication necessary to produce this invaluable resource.