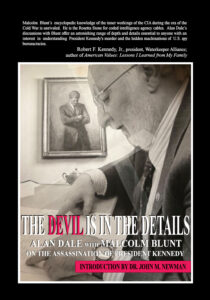 Following is from my Malcolm Blunt book, The Devil is in the Details, Chapter Seven, Quilted Patterns, published November 2020. The conversation took place in late November of 2016:
MALCOLM BLUNT: … I think one of the most important things, Alan, when you check the records, you go through the Warren Commission records – the working papers and the working notes of John Hart Ely – you find in the subtext of some of the drafts where he discusses the fact that there may have to be material alteration in Lee Harvey Oswald’s biography.
ALAN DALE: Material alteration.
MALCOLM BLUNT: Material alterations, yep.
ALAN DALE: And his name is John Hart Ely.
MALCOLM BLUNT: Yep.
ALAN DALE: So why would there, why would there have to be material alterations?
MALCOLM BLUNT: Well, we get back to the same thing: because some things just don’t fit.
ALAN DALE: Time after – it’s not just one thing; it’s time after time after time after time.
MALCOLM BLUNT: Some things just don’t fit.
ALAN DALE: Well, that’s a drag, that’s a drag. I’m holding a document that you shared with me. It’s CIA document 104-10331-10129; it’s JFK document, Agency originator CIA, from…withheld – we’re not supposed to know, although you have an educated guess about the woman…
MALCOLM BLUNT: Mmhmm.
ALAN DALE: …responsible for writing this – and it’s addressed to J. Barry Harrelson. Now who was J. Barry Harrelson?
MALCOLM BLUNT: He was chief of the Historical Review Group.
ALAN DALE: Inside the Agency.
MALCOLM BLUNT: Inside the Agency. They were in charge of cooperating with the ARRB and getting stuff released.
ALAN DALE: Yeah. And some of them were proactive a little bit, or at least not completely, you know, obstructionist, right?
MALCOLM BLUNT: Yeah. I think there were people there who were generally trying to get stuff put out there, yeah.
ALAN DALE: Mmhmm. So, the piece of correspondence to which this cover sheet refers is from within the Agency to someone in the Historical Review Group of the Agency.
MALCOLM BLUNT: Mm.
ALAN DALE: And it’s dated December 21st 1995, so it’s towards the beginning era of the ARRB.
MALCOLM BLUNT: Mmhmm.
ALAN DALE: And – may I read this just for a moment?
MALCOLM BLUNT: Sure, yeah.
ALAN DALE: Just for the record, Senator.
MALCOLM BLUNT: For the record, yeah.
ALAN DALE: I want to read this into the record.
MALCOLM BLUNT: Yeah.
ALAN DALE:
SUBJECT: JFK – Postponed Release Dates.
I looked over the Board’s press release of December 20th 1995 which you faxed to me this morning. You asked me whether the Board had the power to set future “release dates” of postponed documents, as stated in the final paragraph of page 2.
Based on my review of the JFK Act, the Board’s statement that it is their responsibility to set “postponed released dates” is not quite accurate. When the Board decides to postpone a document, it also sets a date or condition for future disclosure (JFK ACT Sec 9(3)(B)). At that time the originating agency and the Archivist review the document again (JFK ACT Sec 5(g)(1)). Although it is obviously the Board’s hope that the document ultimately gets released in full, the Agency and the Archivist will have the power to continue to postpone release if necessary. Any decisions to continue postponement, however, must be supported by a written unclassified statement that will be published in the Federal Register.
As you are well aware, all records shall be released in full by 2017. However, even then, the Agency can always appeal to the President. Postponement is possible beyond 2017 if the President certifies that it is necessary to prevent an identifiable harm to military defense, intelligence, law enforcement or foreign relations and that harm outweighs the public interest in disclosure.
In sum, it would be more accurate to state that the Board is setting future “review” dates, and not “release” dates.
I hope this answers your question. If you have any further questions let me know.
MALCOLM BLUNT: I think that’s a very interesting communication, because it gives an insight into Agency thinking on the release of documents. They don’t quite see it the way that we see it. We think…
ALAN DALE: [laughing]. Yeah. No, they’re on a different side.
MALCOLM BLUNT: …that everything is going to be released in 2017 – there might be a few appeals to the President – but they see it slightly different.
ALAN DALE: Mmhmm.
MALCOLM BLUNT: Slightly differently, yeah.
ALAN DALE: So even though that was written – it’s in-house, from inside the Agency to another part of the interior of the Agency…
MALCOLM BLUNT: Yeah.
ALAN DALE: It’s from 1995, but it’s still relevant, you know, it still has meaning to us.
MALCOLM BLUNT: Sure.
ALAN DALE: Here we are on the threshold of 2017, but there’s nothing, no reason to think that the policy is…
MALCOLM BLUNT: Well, it just gives us, you know, an insight into their perspective.
ALAN DALE: Mmhmm.
MALCOLM BLUNT: You know, they don’t quite see it as, you know, 2017 releases, they see it as a possibility that the can could be kicked further down the road. That’s what I’m seeing there. For certain, for certain, you know, documents and certain materials.
[Note: This is exactly what happened. Following a successful appeal to President Donald Trump to postpone full release of all remaining JFK assassination records, there was a review date set for 6 months after the scheduled release date of 26 October, 2017; The next review of currently withheld documents is scheduled for 2023]

ORDER THE DEVIL IS IN THE DETAILS HERE