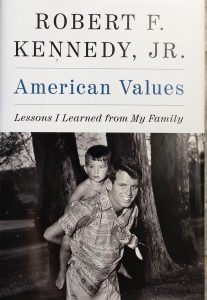 Participating in the political destiny of our nation

There are moments when complementary facets of our lives come together and find expression in the form of a favorite song, a movie, a particular book.  I’m referring to what we’ve all experienced when the right something comes along at the right time. Robert F. Kennedy, Jr.’s deeply personal memoir, American Values: Lessons I Learned from My Family is, for me, such a book.

American Values is an authoritative introduction to America’s preeminent political family. It offers candid revelations from the perspective of our guide who lives the meaning of his family’s name, and it conveys, directly and convincingly, how one may choose to respond to the complex forms of adversity befalling our nation and our world. It also informs us quite a lot about the way real power is exercised in the modern world and the formidable forces against which John and Robert Kennedy were pitted during the 1960s. Ultimately, we are allowed to accompany the author as he courageously follows a path of illumination while exploring the dark places and true circumstances by which his family’s influence and much of the world’s hope was disrupted by gunfire.

Beginning with Chapter One, “Grandpa,” readers of a certain age will be challenged to rethink whatever they have accepted as probably true about the people whose lives and careers are relevant to the telling of this story. Younger readers, who come to this work as an introduction, without having to divest themselves from decades of character assassination, mythology and misrepresentation, will benefit from this portrait of the author’s patriarchal grandfather, Joseph Patrick Kennedy whose “integrity and horse sense” established foundational principles which would be passed down through successive Kennedy generations. Readers young and old may be startled by the author’s brief but informative remedial history lesson as he examines important dynamics of social and political power structures of the 1920s and ’30s through which his grandparents lived and which stand as starkly relevant to understanding much of what confronts us today. 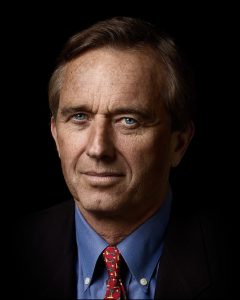 Recollections of youthful encounters with colossal figures such as LBJ, J. Edgar Hoover, memorable conversational sketches of Allen Dulles and others by Kennedy family friends and relatives, all kinds of interesting observations, amusing anecdotes and perceptions abound across many pages, but astute readers will recognize very early on, there’s more being offered than charming reminiscences.  It is the backdrop, the context against which the array of privileged experiences being presented is told that distinguishes this narrative as particularly informed and noteworthy.  RFK, Jr. has committed himself to examining various manifestations of the national security state as it responded, adversely, to President Kennedy, Senator Robert Kennedy and the reforms which they sought to ensure that our children’s children would be born into a world where reasonable men would value peace over war, justice over inequality, opportunity over exclusion, and freedom over the many different forms of tyranny and enslavement.

There is great joy and much color throughout this reading experience. There’s also the inevitable poignancy and heartbreak that we know. Above all, there is the ineluctable presence of unconditional love. Three people who receive special attention by the author are Lem Billings, Ena Bernard, and Ethel Kennedy. Their stories, and the very personal manner by which their stories are told, are among the most affecting of all that the author has shared.

American Values is an inspiring journey through one man’s life whose story is an astounding record of the people and events that shaped our nation during a period of unprecedented danger and opportunity. It is also an affirmation of all that we may see as what is best about our collective efforts as a nation, our collective aspirations to determine our destiny through the work of our own hands, to persevere through cruelties and obstacles, addictions, disappointment and profound loss, battling against complacency, facing our fears, while maintaining our faith, our conviction, and our willingness to dream things that never were, and say, “Why not?”

CLICK TO PURCHASE AMERICAN VALUES: LESSONS I LEARNED FROM MY FAMILY