Presents evidence suggesting collusion between US and Israeli intelligence in the attack on a US naval surveillance vessel during the Six-Day War and the more than fifty-year long cover-up. 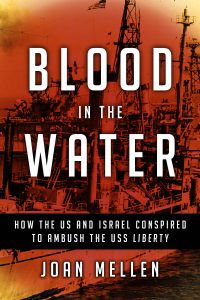 On June 8, 1967, the USS Liberty, an unarmed intelligence ship reporting to the Joint Chiefs of Staff under the auspices of the National Security Agency, was positioned in international waters off the coast of Egypt when it was attacked with deadly violence by unmarked jet planes firing rockets and machine guns and throwing napalm onto its deck. This ambush was followed by a torpedo strike that blew a forty-foot hole in the starboard side of the ship. Lacking the capacity to defend themselves, thirty-four sailors were killed and 174 wounded, many for life. By the end of the day, Israel had confessed to having been the aggressor, simultaneously arguing that the attack had been an “accident” and a “mistake.”
The facts said otherwise. So intense and sustained was the attack – it lasted for nearly an hour and a half – so specific was the aiming for the antennae and satellite 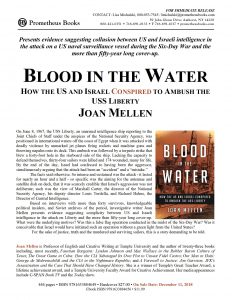 dish on deck, that it was scarcely credible that Israel’s aggression was not deliberate; such was the view of Marshall Carter, the director of the National Security Agency, his deputy director Louis Tordella, and Richard Helms, the Director of Central Intelligence.
Based on interviews with more than forty survivors, knowledgeable political insiders, and Soviet archives of the period, investigative writer Joan Mellen presents evidence suggesting complicity between US and Israeli intelligence in the attack on Liberty and the more than fifty-year long cover-up. What were the underlying motives? Was this a false flag operation conducted in the midst of the Six-Day War? Was it conceivable that Israel would have initiated such an operation without a green light from the United States?

For the sake of justice, truth and the murdered and surviving sailors, this is a story demanding to be told.

Click HERE to listen to Alan Dale’s conversation with Professor Mellen about Blood in the Water, 44:12 – Recorded September, 2018 |

Purchase Blood In the Water