Schrade contends that Sirhan was not the only shooter that night. In an exclusive interview that aired on 10News Tuesday night, Schrade stated that Kennedy was actually killed by a second gunman.

Here is the full text of the statement he gave Wednesday to the parole board at the Richard J. Donovan Correctional Facility, where the now 71-year-old Sirhan is being held. 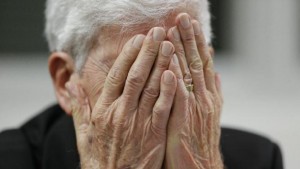 Paul Schrade, who was shot in the head by Sirhan Sirhan, reacts during a parole hearing for Sirhan Wednesday, Feb. 10, 2016, at the Richard J. Donovan Correctional Facility in San Diego. For the 15th time, officials denied parole for Sirhan Sirhan, the convicted assassin of Sen. Robert F. Kennedy, after hearing Wednesday from another person who was shot that night and called for the release of Sirhan. (AP Photo/Gregory Bull, Pool)

I am Paul Schrade of Los Angeles. I am 91-years-old. And back when I was 43, I was among six persons shot at the old Ambassador Hotel in Los Angeles at just after Midnight on June 5th, 1968.

I was shot along with Senator Robert F. Kennedy, who had just won California’s Democratic Primary Election for the Presidency of the United States. Five of us survived our wounds. And as history knows, Senator Kennedy was fatally wounded.

I am here to speak for myself, a shooting victim, and to bear witness for my friend, Bob Kennedy.

Kennedy was a man of justice. But, so far, justice has not been served in this case. And I feel obliged as both a shooting victim and as an American to speak out about this — and to honor the memory of the greatest American I’ve ever known, Robert Francis Kennedy.

Sirhan Bishara Sirhan was originally scheduled for release in 1984 but, after intense political pressure, his parole date was rescinded and he has since been denied 14 times.

In order for you to make an accurate determination of Sirhan Sirhan’s parole, you need to know my feelings on this case and the full picture of what actually happened.

Sirhan, I forgive you.

The evidence clearly shows you were not the gunman who shot Robert Kennedy. There is clear evidence of a second gunman in that kitchen pantry who shot Robert Kennedy. One of the bullets — the fatal bullet — struck Bob in the back of the head. Two bullets struck Bob literally in his back. A fourth bullet struck the back of his coat’s upper right seam and passed harmlessly through his coat. I believe all four of those bullets were fired from a second gunman standing behind Bob. You were never behind Bob, nor was Bob’s back ever exposed to you.

Gentlemen, the evidence clearly shows that Sirhan Sirhan could not and did not shoot Senator Bob Kennedy.

Several days ago, I made sure that several documents were submitted to this board for you to review. If you have not done so as yet, I would ask you to please review them very carefully during your deliberation. I will be glad to re-submit these documents to you, here today.

I believe, after you review these documents, that it should become clear to you that Sirhan Sirhan did not shoot — and could not have shot — Robert Kennedy. What I am saying to you is that Sirhan himself was a victim.

Obviously there was someone else there in that pantry also firing a gun. While Sirhan was standing in front of Bob Kennedy and his shots were creating a distraction, the other shooter secretly fired at the senator from behind and fatally wounded him. Bob died 25 hours later.

Gentlemen, I believe you should grant Sirhan Sirhan parole. And I ask you to do that today.

First, I want to show you this. It’s a letter written in 2012 by my good friend, Robert F. Kennedy Junior. Bobby wrote this letter to Eric Holder, who was then the Attorney General of the United States. In his letter to Mr. Holder, Bobby requests that federal authorities examine the Pruszynski Recording, the only known audio recording made of his father’s assassination at the Ambassador Hotel. The recording was uncovered in 2004 at the California State Archives by CNN International senior writer Brad Johnson.

This next document is a federal court declaration from audio expert Philip Van Praag, who Johnson recruited to analyze the Pruszynski Recording.

In this document, Van Praag declares that his analysis of the recording concludes that two guns were fired in the Robert Kennedy shooting.

Van Praag found a total of 13 gunshots in the Pruszynski Recording. Sirhan’s one and only gun at the crime scene held no more than eight bullets and Sirhan had no opportunity to reload it.

Van Praag also found what he calls “double-shots” — meaning two gunshots fired so close together that they could not both have come from Sirhan’s Iver Johnson Cadet revolver. Van Praag actually found two sets of these “double-shots”.

Additionally, he found that five of the 13 gunshots featured a unique audio resonance characteristic that could not have been produced by Sirhan’s gun model, meaning those five shots were fired from a second gun of a different make.

These documents are statements from two witnesses to the Robert Kennedy shooting, both of them assistant maître d’s for the Ambassador Hotel. These two men, Karl Uecker and Edward Minasian, escorted Robert Kennedy into the kitchen pantry immediately after the Senator delivered his victory speech in a hotel ballroom for having won the California Primary. Both Uecker and Minasian say Sirhan was in front of Bob Kennedy as the Senator walked toward Sirhan, meaning that Bob and Sirhan were facing each other. Both witnesses say Sirhan was still in front of Bob as Sirhan fired his gun. And both say that after Sirhan fired his first two shots, Uecker quickly pushed Sirhan against a steam table, placing Sirhan in a headlock while grabbing hold of Sirhan’s firing arm, forcing the tip of Sirhan’s gun to point away from where Bob Kennedy was and causing Sirhan to fire blindly his remaining six bullets.

In other words, Sirhan only had full control of his gun at the beginning, when he fired his first two shots, one of which hit me. Sirhan had no opportunity to fire four precisely-placed, point-blank bullets into the back of Bob Kennedy’s head or body while he was pinned against that steam table and while he and Bob were facing each other.

This document is the official Robert Kennedy autopsy report summary. It shows that all bullets directed at Senator Kennedy were fired from behind him at point-blank range. As the autopsy states, and as these drawings show, the bullets traveled from back-to-front at steep upward trajectories. One bullet struck Senator Kennedy at the back of the head, two bullets at the right rear armpit and a fourth bullet at the right rear shoulder of his jacket, which passed harmlessly through his jacket.

Again, Sirhan’s bullets could not have struck the back of Bob Kennedy’s head or the back of his body or the back of his jacket’s right shoulder, as the autopsy clear shows took place, because Sirhan was never in a position to administer any of those four Kennedy shots. The prosecution never placed Sirhan in that location and position.

These are documents from the Los Angeles Police Department that reveal LAPD misconduct in the police investigation of the Robert Kennedy murder. They detail evidence that was destroyed while Sirhan’s appeal was still pending as well as a photograph that was acknowledged by the LAPD to be “effective rebuttal” but was withheld from the defense team.

Indeed, the LAPD and L.A. County District Attorney knew two hours after the shooting of Senator Kennedy that he was shot by a second gunman and they had conclusive evidence that Sirhan could not — and did not — do it. The official record shows that the prosecution at Sirhan’s trial never had one witness — and had no physical nor ballistic evidence — to prove Sirhan shot Bob Kennedy. Evidence locked up for 20 years shows that the LAPD destroyed physical evidence and hid ballistic evidence exonerating Sirhan — and covered up conclusive evidence that a second gunman fatally wounded Robert Kennedy.

This document is a memo written by Criminalist Larry Baggett, who investigated the Robert Kennedy shooting for the LAPD. The Baggett memo states that the bullets that hit Senator Kennedy and William Weisel, another shooting victim in the pantry, were not fired from the same gun. The memo also states that the bullet that traveled upward through Bob Kennedy’s body and into his neck was not fired from Sirhan’s revolver. Such a finding would be proof that Sirhan did not shoot Robert Kennedy.

Mr. Deputy District Attorney, based on all of this information and more, I ask that you inform Los Angeles County District Attorney Jackie Lacey that I am formally requesting her to order a new investigation of the Robert F. Kennedy assassination. I will also be making the same request of Los Angeles Police Chief Charlie Beck.

Please note, Mr. Deputy District Attorney, that I am using the word “new” here. I am not requesting that the old investigation simply be re-opened. For that would only lead to the same old wrong conclusions. I am requesting a new investigation so that after nearly 50 years, justice finally can be served for me as a shooting victim; for the four other shooting victims who also survived their wounds; for Bob Kennedy who did not survive his wounds because his were the most grievously suffered in that kitchen pantry; for the people of the United States who Bob loved so much and had hoped to lead, just as his brother, President John F. Kennedy, had led only a few years before; and of course for justice, to which Bob Kennedy devoted his life.