David Wise, a journalist and author who became one of the country’s foremost authorities on espionage, writing books on the CIA, turncoat spies and whether intelligence agencies had become an unaccountable “invisible government,” died Oct. 8 at a Washington hospital. He was 88.

The cause was pancreatic cancer, said his wife, Joan Wise.

Mr. Wise was a reporter for the old New York Herald Tribune newspaper, which assigned him to its Washington bureau in 1958. He became best known for his coverage of the world of spycraft, writing more than 10 nonfiction books about the Cold War era and beyond, as well as three novels. 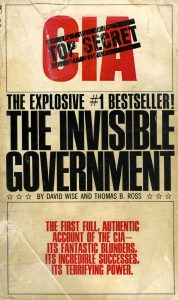 In one of his first books, the best-selling “The Invisible Government,” written with journalist Thomas B. Ross in 1964, Mr. Wise wrote about the excesses of intelligence agencies, including the CIA, and its role in orchestrated coups in Iran and Guatemala in the 1950s.

“We felt very strongly that there were two governments in the United States: one in the civics texts and the other in the real world,” Mr. Wise told the New York Times in 1988. “We thought the intelligence agencies were important to our security. But we were troubled about a system based on the consent of the governed when the governed didn’t know to what they have consented.”

Before “The Invisible Government” was published, the CIA surreptitiously acquired a copy of the galleys and summoned the authors to a meeting with the agency’s director, John A. McCone. Ross and Mr. Wise were told their book was a breach of national security. They were handed a list of 10 items stamped “Top Secret” and were told the information was not allowed outside CIA headquarters.

The authors said all the information in the book came from unclassified sources, and that they intended to publish their book without any changes. After some hesi­ta­tion, one of McCone’s assistants then took a pair of scissors and cut the words “Top Secret” from the page, and Ross and Mr. Wise were free to go.

“I later obtained part of my file under the Freedom of Information Act, and learned that a whole ‘task force’ had been assigned to me,” Mr. Wise told The Washington Post in 1981. “One phrase stated that the agency ‘should contact such assets as it has in the press to try to secure unfavorable book reviews, and so discredit author.’ They also ran a legal study to see if they could lawfully buy up the entire first printing.”

He also noted that the CIA’s legal counsel had called the book “uncannily accurate” — in large part, Mr. Wise later said, because one of his primary sources was Allen W. Dulles, the CIA’s founding director.

For more than 40 years, Mr. Wise continued to write books — including three novels — that exposed the tactics, blunders and dangers of a security state. He was “generally described,” as journalist Evan Thomas wrote in the Times, “as the best-sourced, most knowledgeable author of books on espionage.”

During the 1970s, Mr. Wise warned of the erosion of personal liberties and public accountability in his books “The Politics of Lying: Government Deception, Secrecy, and Power” and “The American Police State: The Government Against the People.”