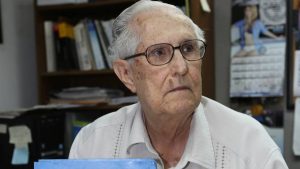 BY SARAH MORENOJUNE 19, 2020 01:58 PM , UPDATED JUNE 19, 2020 04:53 PM
Antonio Veciana, a Cuban anti-Castro fighter in the early 1960s who helped found
the militant group Alpha 66, died Thursday in an assisted-care facility in Miami. He
was 91.
His daughter, former Miami Herald writer Ana Veciana-Suarez, said he had been ill
for several months and been placed in hospice care.
Known for his work as co-founder of Alpha 66, an organization that took part in the
armed struggle against the Cuban government of Fidel Castro, Veciana had been
active in the organization since the 1960s and collaborated with other early antiCastro fighters Andres Nazario Sargen and Eloy Gutiérrez Menoyo.
He was trained by the CIA to carry out military actions and is said to have
coordinated several attempts to assassinate Fidel Castro. When the first of those,
from within Cuba, failed, Veciana was forced to flee the island in 1961 and came to
Miami.
“My father had a devotion to seeing a democratic Cuba,” said Veciana-Suarez, who
remembers as a child attending exile meetings in Allapattah in which children
learned about Cuba and played, while adults conspired to achieve freedom in their
country.
“I remember they brought us little cakes,” said Veciana-Suarez, indicating that it was
a time of many difficulties in which the family did not put up a Christmas tree
because they always thought they would soon return to Cuba.
Of Catalan origin, Veciana was an accountant in pre-Castro Cuba, where he also
worked with Julio Lobo, a wealthy businessman and owner of sugar mills on the
island before 1959.
“My father presided over the island’s accountants organization,” Veciana-Suarez
said, noting that perhaps his leadership qualities and ability to learn quickly were
what caught the attention of the CIA for his recruitment.
Roger Redondo, who also took part in the exile struggle against Castro with Veciana,
recalled him as a smart man who had an ability to raise funds.
“He is the smartest man I have ever met,” said Redondo, recalling the founding of
Alpha 66.
In the 1960s and ‘70s, Veciana worked for the CIA in Bolivia, until he fell out with the
agent who was running him, David Atlee Phillips, who at one point told him that U.S.
policy toward Cuba had changed and that he could not carry out any more
operations to help liberate Cuba.
Veciana recounted his exploits in the 2017 book “Trained to Kill: The Inside Story of
CIA Plots against Castro, Kennedy, and Che,” along with writer Carlos Harrison.
In the book, Veciana recounts an episode involving Phillips, whose code-name was
Bishop, and John F. Kennedy’s assassin, Lee Harvey Oswald.
Veciana said he went to meet Bishop at a hotel in Dallas, Texas, and when he arrived,
Bishop was talking to a young man who left immediately. They were introduced in
passing, and after Kennedy’s assassination, Veciana recognized from TV images the
young man who had been with Bishop: It was Oswald.
During congressional hearings on the assassination, Veciana did not mention the
incident, fearing that he or his family would be harmed, his daughter said.
Despite his early hard line against the Cuban government, Veciana later came to
believe that Cubans on the island were responsible for freeing themselves from
communism, his daughter said.
“Although he had a fixed idea of bringing democracy to Cuba, he was actually quite a
liberal and progressive person,” said Veciana-Suarez, who said there was a
difference between the public image of her father and the family man and loving
father and grandfather she knew.
“The public sees him in a way, like the founder of Alpha 66, the Cuban who
participated in attacks on Fidel Castro, but in the end he was my father,” said
Veciana-Suarez, who lived with him and cared for him for his last 18 years, in which
he suffered from dementia.
“The relationship changed as he got old. I became his mother and he behaved as if
he were a small child,” she said.
Because of the coronavirus pandemic, there will be no funeral services for Veciana.
The family plans to hold a Mass for close friends and family, and perhaps a more
public memorial next year.

READ MORE AT THE MIAMI HERALD