“I do not need this court, these prosecutors or a piece of paper to tell me I am innocent,” said Muhammad Aziz, who spent two decades in prison.

A judge tossed out the convictions of Muhammad A. Aziz and Khalil Islam, who were found guilty of killing Malcolm X. Mr. Aziz spoke about the “travesty of justice” at a court hearing.

“The event that brought us to court today should never have occurred. Those events were, and are, the result of a process that was corrupt to its core, one that was all too familiar to Black people in 2021. While I do not need this court, these prosecutors or a piece of paper to tell me I’m innocent, I am very glad that my family, my friends and the friends who have worked and supported me over these years are finally seeing the truth that we have all known, officially recognized. I’m an 83-year-old man who was victimized by the criminal justice system. I do not know how many more years of creative activity I have. However, I hope the same system that was responsible for this travesty of justice also takes responsibility for the immeasurable harm it caused to me during the last 55 or 56 years.” “There can be no question that this is a case that cries out for fundamental justice. This court’s paramount purpose is and always has been to uphold the law and pursue justice. To Mr. Aziz and your family, and to the family of Mr. Islam, I regret that this court cannot fully undo the serious miscarriages of justice in this case and give you back the many years that were lost. Dismissal of the indictment is the full extent of this court’s authority. But for the reasons set forth in the joint application, and based on the record that have been made today, this court’s mandate requires that the judgements of conviction be vacated and that the indictment against Mr. Aziz and Mr. Islam be dismissed. The joint motion is hereby granted.” [applause]

Here’s what you need to know:

Here are highlights from the motion asking that the convictions be tossed. 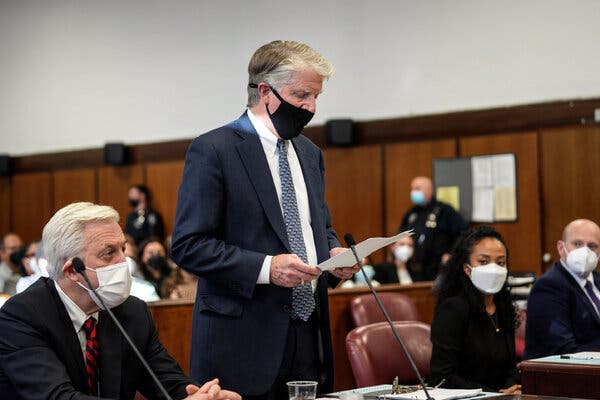 A motion filed by the Manhattan district attorney asking a judge to toss out the convictions of Muhammad A. Aziz and Khalil Islam in the murder of Malcolm X concludes that crucial evidence was withheld during the men’s trial.

The 43-page motion, which was granted at a hearing on Thursday, described in detail the investigation conducted by the district attorney, Cyrus R. Vance Jr., and the men’s lawyers.

It concludes that if evidence withheld by the Federal Bureau of Investigation and the New York Police Department had been given to the defense, the trial would likely have gone differently. 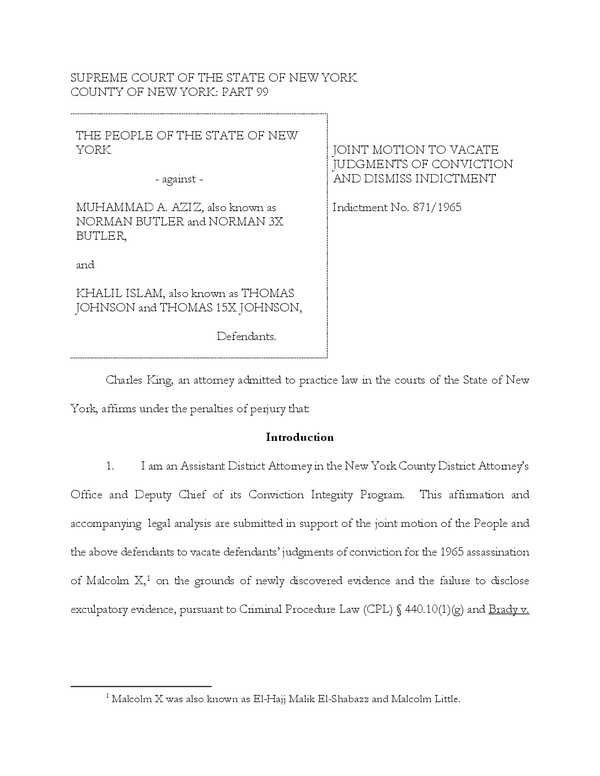 A review by the Manhattan district attorney and lawyers for the two men originally convicted decades ago found they did not receive a fair trial. The son of one of the men called the move “bittersweet.”

“These defendants did not receive a fair trial,” the motion says. “And we respectfully submit that their convictions should be vacated and the indictment against them be dismissed.”

The motion includes a host of new findings. It mentions an interview with a new witness, J.M., conducted only days after the re-investigation began. J.M. said he was answering the telephone at the Nation of Islam’s Harlem mosque the day of the assassination and that his account backed up the alibi of Mr. Aziz.

“J.M. recalled receiving a phone call from Aziz at around 3:00 p.m. on February 21st, informing him that Aziz had just heard Malcolm X had been shot,” the motion says.

J.M. then hung up and went to get the mosque’s “captain” and together, the two men called Mr. Aziz back at his home.

“J.M. reached Aziz at home and told him the captain wanted to speak to him,” the motion says, a simple sentence that lends credence to Mr. Aziz’s story that he was at home at 3 p.m. when Malcolm X was shot.

A Trove of Documents From Law Enforcement

The motion details more than a dozen reports compiled by the F.B.I. and the N.Y.P.D. that were not disclosed to the defense, several of which point toward the men’s innocence.

The F.B.I. reports contain the accounts of several witnesses who describe gunmen who do not resemble the two men, as well as details about agency informants, who were present in the Washington Heights ballroom where Malcolm X was killed.

One F.B.I. report from Sept. 28, 1965, even contains a description of the man whom some experts on the assassination have concluded was probably the assassin who wielded a shotgun — William Bradley.

That report gives a description of Mr. Bradley, who was 27 years old at the time, that matches the one given by a defense witness of the shooter who had a shotgun.

“He had been a lieutenant in the Newark mosque and was known as a ‘strongman’ there,” the F.B.I. report on Mr. Bradley said. “He was a machine gunner in the Marine Corps.”

At least one of the witnesses at the trial was an informant for the F.B.I., according to the documents cited in the motion. One document, dated Feb. 25, 1965, said the bureau had ordered its local offices not to disclose to the New York police the fact that any witnesses were federal informants.

In addition, several F.B.I. reports indicated that, on the orders of the agency’s director, J. Edgar Hoover, informants were told not to disclose their relationship with the F.B.I. when talking to the New York police and prosecutors about the murder, according to a footnote in the motion.

The Police Department documents include descriptions of undercover detectives having been present in the ballroom, at least one of whom was there at the time of the murder. The report may have been referring to Detective Gene Roberts, an undercover officer who it later came out was working as a member of Malcolm X’s security detail.

The report also describes prosecutorial files that included police reports that would have been helpful to Mr. Aziz and Mr. Islam’s defense. One noted that a witness in the ballroom who knew the accused men well had not seen them there but had seen other men who were associated with a Nation of Islam mosque in New Jersey.

The report makes it clear that prosecutors hid the fact that undercover officers were present during the shooting from the defense, a breach of the rules of evidence.

“The prosecutors were aware that undercover detectives were present at the time of the assassination,” the motion says, adding, “The People did not call any undercover officers at trial. There is no record of this information having been disclosed to the defendants.”

Because potentially exculpatory evidence never reached the defense, the re-investigation concluded that Mr. Aziz and Mr. Islam did not receive a fair trial.

The Question of Innocence

Though the trial was found to be unfair, prosecutors stopped short of declaring that Mr. Aziz and Mr. Islam were innocent of the charges. “Given the information currently available, the People make no determination on the question of the defendants’ actual innocence,” the motion said.

Mr. Vance was asked on Wednesday if he personally believed that the two men were innocent.

“Innocence is actually a term you won’t find in the penal law,” he said. “I will say this: The vacation of these convictions and the dismissal of the indictment means that they stand like any other person who has not been charged with a crime. They stand as presumed innocent.”

One of Malcolm X’s daughters says she hopes the ‘full truth’ can come to light. 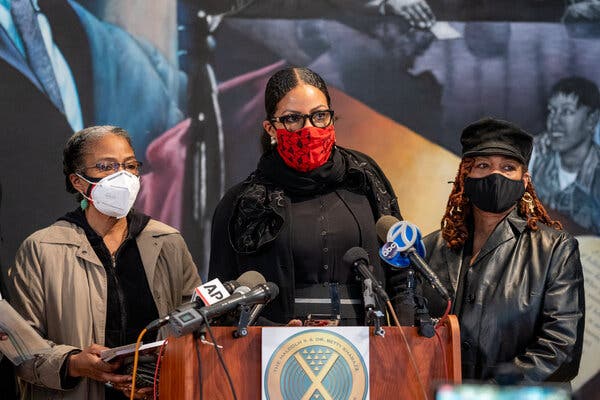 One of Malcolm X’s daughters said on Thursday that she hoped the exonerations of two men wrongly convicted of her father’s assassination would bring “a measure of peace” to their relatives, but that her own family was still seeking justice.

Ilyasah Shabazz was almost 3 years old when she watched her father get gunned down in an Upper Manhattan ballroom. On Thursday, she recalled her mother’s efforts to keep “the legacy and inspiration Malcolm brought to the world alive” after witnessing his “horrific” death — and demanded that those responsible be held accountable.

“Full justice will not be served until all parties involved in the orchestrated killing of our father are identified and brought to justice,” Ms. Shabazz, who is now 59, said in a statement. “It is our hope that finally the full truth can be learned.”

In the more than five decades since Malcolm X’s killing, the children of the civil rights leader — Attallah, Qubilah, Ilyasah, Gamilah, Malikah and Malaak — have pushed for answers along with other relatives, questioning the official narrative of the assassination and the role of government agencies in it.

Three of Malcolm X’s daughters were present in the Audubon Ballroom as gunmen poured bullets into their father and they say they continue to carry the trauma with them. As the shooting broke out, their mother, Betty Shabazz — who was pregnant with twins — threw herself over them, they have recalled.

Ilyasah Shabazz, who is the third oldest, said in 2005 that she has little recollection of the shooting. Still, she added at the time, “you still have to be traumatized by all the noise and commotion and my mother covering us up.”

For Attallah Shabazz, the oldest daughter, who was around 6, the image was clearer: “I’m a child with the forever memory of the most significant man in my life standing at a podium and falling backwards,” she said in a television interview in 2000. “That’s forever.”

The family has long been in conflict with Louis Farrakhan, the leader of the Nation of Islam, whom they accused of playing a role in the assassination plot, an allegation Mr. Farrakhan has denied. They also have sought to reframe the public understanding of Malcolm X’s legacy.

Ilyasah Shabazz’s 2002 memoir, “Growing Up X,” described her childhood and the memories she held of her father — and how her life was shaped by his own life story.

And Betty Shabazz, a civil rights advocate herself who died in 1997, said she taught their six daughters about their father by emulating his personality.

“I taught them about him by myself being disciplined and strict,” she said in 1993. “My children think my persona is me, when actually, it is their father’s.”