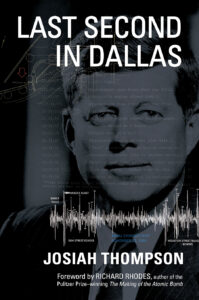 In this long-awaited follow-up to his critically acclaimed 1967 classic, Six Seconds in Dallas, Josiah Thompson reveals major new forensic discoveries since the year 2000 that overturn previously accepted “facts” about the Kennedy assassination. Together they provide what no previous book on the assassination has done—incontrovertible proof that JFK was killed in a crossfire.

Last Second in Dallas is not a conspiracy book. No theory of who did it is offered or discussed. Among the discoveries: The test showing that all recovered bullet fragments came from Oswald’s rifle was mistaken. Several fragments could have come from bullets of any manufacturer and any caliber. The sudden two-inch forward movement of the president’s head in the Zapruder film just before his head explodes is revealed to be an optical illusion caused by the movement of Zapruder’s camera. This leaves without further challenge clear evidence that this shot came from a specific location to the right front of the limousine. Detailed analysis of film frames matched by the newly validated acoustic evidence show a second shot struck the president’s head from behind less than a second later. Result: two killing shots to the head from opposite directions in the final second of the shooting—hence the book’s title.

At once a historical detective story and a deeply personal narrative by a major figure in the field, Last Second in Dallas captures the drama and sweep of events, detailing government missteps and political bias as well as the junk science, hubris, and controversy that have dogged the investigation from the beginning. Into this account Thompson weaves his own eventful journey, that of a Yale-educated scholar who in 1976 resigned his tenured professorship in philosophy to become a private investigator in San Francisco, developing a national reputation.

Dr. Josiah Thompson investigated numerous high-profile murder cases during his thirty-five-year career specializing in criminal defense, including the Oklahoma City bombing as defense investigator for Timothy McVeigh. Thompson’s publications include two books on the Danish existentialist thinker Søren Kierkegaard and a memoir about his jump from professor to detective, Gumshoe. He and his wife Nancy live in northern California. 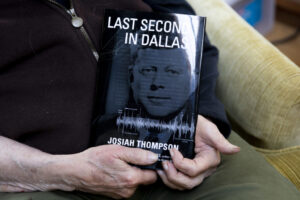 Author and former private investigator Josiah Thompson holds his new book “Last Second in Dallas” while sitting in the office of his home in Bolinas, Calif. Friday, March 19, 2021. Thompson, a former tenured philosophy professor turned private investigator (now retired) may have just cracked the Kennedy Assassination case. He doesn’t know who did it, but he makes a compelling case for what happened at Dealey Plaza in his late book “Last Second in Dallas.” [Credit, San Francisco Chronicle]

“What Thompson’s narrative contributes to the nation and the field is original forensic data, and the most comprehensive, up-to-date study every published on both the science and the scientists behind the scene of the investigation into the assassination of President Kennedy.”—The Brooklyn Rail

“An eminently worthwhile addition to the literature that includes some game changing research into one of the Kennedy assassination’s key pieces of evidence.”–Martin Hay in Kennedys and King

“Thompson presents the reader with new observations which should erase all doubt of a single gunman in Dealey Plaza. . . . It is highly recommended reading and should be regarded as a significant book in the history of the JFK assassination.”–Dr. Randy Robertson in Kennedys and King

Purchase Last Second in Dallas at Amazon by clicking HERE