Who was the Soviet mole in the CIA?  Newman’s arguments will, I am sure, dominate all future discussions of this surprisingly important political question. 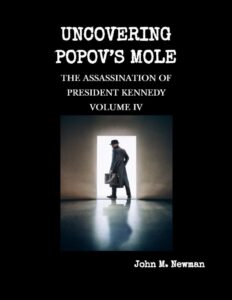 The publication of Uncovering Popov’s Mole represents an unprecedented examination of the decades-long search, within the CIA, for a mole working for the KGB. Unlike a British mole working for the KGB in MI-6 (UK intelligence), who publicly fled to Moscow to avoid capture, the mole in the CIA was never exposed or identified up to the present day. This volume presents an entirely new hypothesis on the authority and objectives of the mole–working within the CIA’s Office of Security–and reveals a dramatic new context in relation to understanding Lee Harvey Oswald’s 1959 defection to the USSR.

The molehunt wrought catastrophic consequences to the Agency for more than two decades. When viewed as a calculated misdirection, being run by the mole himself, what does that mean in relation to the utilization of Oswald as bait? There are staggering ramifications, the scope and depth of which may take years to come to light.

However, Newman’s work makes clear how the mole in the Security Office deflected attention from himself by convincing the chief of CIA counterintelligence, James Angleton, that Oswald could be used as bait to find the mole working in CIA’s Soviet Russia Division. Furthermore, Uncovering Popov’s Mole shows how Angleton unknowingly provided all of the Agency’s sensitive secrets to the mole in the Office of Security–as he had previously to Kim Philby.

New doors are about to open. Newman’s works are history in the making.

Dr. John Newman: Adjunct Professor of Political Science at James Madison University; Major U.S. Army Intelligence (Retired); Military Assistant to the Director of the National Security Agency, Lieutenant General William Odom. Newman’s other works include JFK and Vietnam (second edition pub. 2017), Oswald and the CIA, Quest for the Kingdom: The Secret Teachings of Jesus in the Light of Yogic Mysticism.

Verified Purchase
Every development in the history of deep JFK assassination research corresponds to a moment in time. As a work-in-progress, we are today building upon 59 years of records acquisition, data collection and analysis. It is what fuels our advancement and compels us to question our certainties and revise our beliefs; and it is in this context (more than 18 months ago), while overlaying a particular subset of travel records on top of event chronologies that this volume revealed itself.

Those who are deeply interested in the JFK story will have become accustomed to sifting through detritus. On the subject of alleged commie, alleged lone nut, alleged presidential assassin, Lee Harvey Oswald, in no other area of which I’m aware are we quite so inundated with major claims made by minor figures. In contrast to what some have declared about poor hapless misfit, Lee Oswald, being of no interest or value to either the KGB or CIA, we no longer have to speculate about some aspects of that debate. Uncovering Popov’s Mole is the first work of which I’m aware to report and identify the trusted Minsk KGB defector, IJDECANTER, who gave unprecedented privileged information to both the FBI (Flash Run) and the Agency about Marina and Lee Oswald’s time together in the Soviet Union.

Discussion of Oswald’s defection, his alleged familiarity with sensitive U-2 information, his proximity to the U-2 while stationed at Atsugi and, in particular, the probability that his role as defector was being managed as bait in a super-secret but authorized operation, must include some consideration of the following questions: What explanation can there be for action being undertaken within CIA, prior to Oswald’s defection, which changed the standard process of dissemination so that none of the relevant paperwork generated by that event went where it should have gone, to the various desks of the Soviet Russia Division? Why, instead, were those documents diverted to the Office of Security? If this action was not initiated by Counterintelligence chief, James Angleton, to whom so many have concluded, perhaps prematurely, that all mysterious roads must lead, then who else had the authority to conceive and conduct this operation? And, finally, not merely who, but why? Why was this action undertaken? The answers being offered in this book may surprise.

To get to the answers to those questions, Dr. Newman leads us down a very deep dive into the mid-1950s through 1975, with moles and mole hunts, defectors and liars, traitors and scoundrels and fools all along the way. There’s also quite a bit that will inform our reluctant but appropriate admission: there were giants and Grand Masters, on both sides, at work as adversaries on the Cold War chess board, Ivan Agayantz, Pete Bagley, and Sergei Kondrachev most notably among them.

Uncovering Popov’s Mole is not an only child. For several decades, Professor Peter Dale Scott and a devoted group of JFK assassination researchers have focused on what was visible in the bright mid-day sun being reflected off the chrome of President Kennedy’s limousine in Dealey Plaza, and also upon what has been hidden, deliberately, inside the instantly enveloping darkness of very real and very deep Cold War history.

The focus of Dr. Newman’s body of work represents a major commitment to review the available documentary record, and to identify as many as is possible of the primary and secondary Cold War players on both sides. The case being made within these pages is that, as of 31 October 1959, Lee Oswald was an essential part of a false mole hunt that was specially crafted by the mole himself to mislead the Counterintelligence (CI) staff, deflect attention away from himself, and focus instead upon the Soviet Russia Division. This was done under the cover of appearing to be a legitimate mole hunt, necessarily initiated in response to Pyotr Popov’s 1958 warning that the Soviet authorities had acquired complete technical details of the U-2 spy plane.

With his trademark attention to the fine details of the files, John Newman here unravels the mystery of Popov’s mole, or how the edifice of US Cold War intelligence was rotten at its core. Then as now, hubris ruled the official view of Russia, leading then to the debacle in Vietnam and now to the brink of general war.

The University of Texas at Austin

A spy thriller worthy of Le Carré—John Newman has done it again. Using his formidable skills as an intelligence analyst, he leads us through the CIA’s wilderness of mirrors into America’s heart of darkness. His groundbreaking research turns decades of conventional wisdom on its head, and reveals the answer to one of the greatest mysteries of the Cold War—the true identity of the KGB’s high-level mole in the CIA.

Major Newman dissects two battles fought behind the scenes during the tensest moments of the Cold War, one fought at CIA over indications that the agency had a KGB mole in its ranks, and one fought at the Pentagon over the role of nuclear weapons in America’s confrontation with the Soviet Union. In the process, Major Newman will leave readers with a brand-new understanding of 11/22/63 and its aftermath.

John Newman has documented the complicated story of the USSR vs. USA “spy wars” throughout the 1950s and early 1960s in a way that makes this complicated subject eminently understandable. For me, it is now a very dramatic story, and a very human one, as well—featuring both honorable defectors, and dishonorable fake defectors, all from the USSR—and their motivations. Complicating the tale is a story of incompetence and deceit within the Central Intelligence Agency, amidst the never-ending search for the Soviet mole within the CIA. Newman reveals, for the first time, the virtually certain identity of the true Soviet mole within America’s spy agency—and the reasons why this individual was never discovered during his lifetime. John Newman is convinced that the fake defection of Lee Harvey Oswald to the USSR in 1959, an unsuccessful attempt to indirectly uncover the Soviet mole’s identity—was part of an elaborate “fake mole hunt” within the CIA, engineered as an intentional deflection by the Soviet mole himself! Finally, the author explains the unfolding spy wars saga in parallel with the simultaneous key developments in the nuclear arms race between the world’s two superpowers—something I have never seen anyone else do.