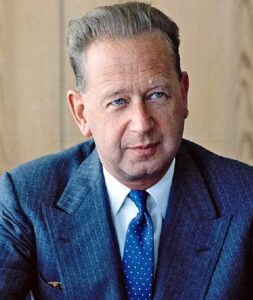 Dag Hammarskjöld, Secretary-General of the United Nations from April 1953 until his death in a plane crash in September 1961.

I have the honour to refer to General Assembly resolution 74/248 concerning the investigation into the conditions and circumstances resulting in the tragic death of Dag Hammarskjöld and of the members of the party accompanying him on flight SE-BDY on the night of 17 to 18 September 1961.

In accordance with paragraph 1 of resolution 74/248, in March 2020 I reappointed Mohamed Chande Othman as Eminent Person to continue to review the information received and possible new information made available by Member States, including by individuals and private entities, to assess its probative value and to draw conclusions from the investigations already conducted. Owing to the coronavirus disease (COVID-19) pandemic, in December 2020 the General Assembly decided, with my support, to extend the mandate of the Eminent Person, and also requested me to report to the Assembly before the end of the seventy-sixth session on progress that had been made.

I renew my profound gratitude to the Eminent Person. The United Nations is indebted to him for this exemplary and consequential work in the pursuit of the full truth concerning the tragic event.

I am encouraged that the Eminent Person has received significant new information and that further advancements in the body of relevant knowledge have been made, following the review of many thousands of pages of records and forensic tests and consultation with experts. I note that such new information includes the areas of probable intercepts by Member States of relevant communications; the capacity of the armed forces of Katanga, or others, to have conducted a possible attack on flight SE-BDY; the presence in the area of foreign paramilitary and intelligence personnel; and further new information relevant to the context and surrounding events of 1961.

I wish to express my gratitude to Member States, independent high-ranking officials appointed by Member States (Independent Appointees) to conduct reviews of their intelligence, security and defense files and private individuals and entities for their cooperation with the Eminent Person and their willingness to provide additional information.

I am encouraged that key Member States have committed at a high level to full cooperation and provided assurances that search requests have or will engage appropriate security, intelligence and defense agencies, and that Independent Appointees from a number of Member States have provided, and may provide in future, additional information. I am also encouraged by the significant information that has been provided to the Eminent Person by private individuals and non-governmental entities.

At the same time, the Eminent Person notes that: (a) no significant information has been provided by key Member States since mid-2017; (b) it is almost certain that further relevant information exists, including radio or other communications; (c) Member States have yet to discharge their burden of proof to show that they have conducted a full review of their records and archives resulting in full disclosure; (d) Independent Appointees may need more time to provide information; and (e) it would be neither judicious nor responsible to reach a conclusion without the benefit of all potentially material information, in circumstances where such information has been shown to be almost certain to exist.

I also support the Eminent Person’s recommendation that all Member States be encouraged to make assistance available to the independent person, including forensic analysis or other research.

Finally, I support the recommendation of the Eminent Person that the United Nations continue to work towards making key documents of the Dag Hammarskjöld investigation publicly available through a dedicated online collection, including documents pertaining to the 1961 United Nations Commission on Investigation, the 2013 Hammarskjöld Commission, the 2015 United Nations Independent Panel of Experts and the 2017 and 2019 reports of the Eminent Person, as well as his present report.

It remains our shared responsibility to pursue, with renewed urgency, the full truth of what happened on that fateful night in 1961. We owe this to Dag Hammarskjöld, to the members of the party accompanying him and to their respective families. We owe this also to the United Nations. I consider this to be our solemn duty and I will do everything I can to support this endeavour.

I call on the General Assembly to remain seized of the matter and to endorse the report of the Eminent Person and his recommendations, as discussed above.