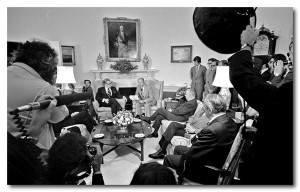 Today’s posting includes the entire suppressed section on assassination attempts, Cheney’s handwritten marginal notes, staff memos warning of the fallout of deleting the controversial section, and White House strategies for presenting the edited report to the public. The documents show that the leadership of the presidentially-appointed commission deliberately curtailed the investigation and ceded its independence to White House political operatives.

This evidence has been lying ignored in government vaults for decades. Much of the work of securing release of the records was done by the John F. Kennedy Assassinations Records Board in the 1990s, and the documents were located at the National Archives and Records Administration at College Park, Maryland; or at the Gerald R. Ford Library in Ann Arbor, Michigan. Additional mandatory declassification review requests filed by Archive fellow John Prados returned identical versions of documents, indicating the CIA is not willing to permit the public to see any more of the assassinations story than we show here. The documents in this set have yet to be incorporated into standard accounts of the events of this period.

Among the highlights of today’s posting:

The Rockefeller Commission, the White House and CIA Assassination Plots

The current controversy over drone attacks has an important backstory. During the 1970s it became known that the Central Intelligence Agency (CIA) had plotted the murder of foreign individuals. These persons for the most part were prominent leaders or even heads of state. That the U.S. government had in any way been engaged in murder became a dark charge against the CIA, and helped inflame the political climate in a way that ensured investigations of the U.S. intelligence agencies would occur.

During those 1975 investigations, particularly those of the Rockefeller Commission and the Church Committee, allegations of CIA involvement in assassinations were among the most important lines of inquiry. President Gerald R. Ford himself had a key role in triggering the investigations, inadvertently but artlessly revealing the fact of CIA involvement in plotting assassinations during a meeting with press editors.[i]

There had already been revelations of illegal domestic activities by the CIA. These led to the creation of a presidential panel under Vice President Nelson A. Rockefeller, and committees of inquiry in both houses of the United States Congress. Ford’s January 1975 admission of CIA involvement posed a dilemma for the administration. Vice President Rockefeller attempted to head off inclusion of the subject, restricting consideration of assassinations to the question of what role Cuba might have had in the assassination of John F. Kennedy. That proved unacceptable to some members of his own commission, among them then-Governor of California Ronald Reagan. When the Rockefeller Commission took a vote on whether to include charges of CIA assassination plots in its inquiry, the group overrode its own chairman.[ii]

Rockefeller’s key opponent in the fight over investigating assassinations was the panel’s staff director, David W. Belin. A lawyer for the Warren Commission, empanelled to look into the Kennedy assassination in 1963-1964, Belin had been handpicked by Ford for the Rockefeller group. Ford, one of the Warren commissioners, was confident of Belin’s loyalty, but this time the lawyer fought hard to investigate deeply.

The investigators sought CIA documents on assassination plots conducted in its history and information on administrative routines. They also questioned key witnesses. As CIA lawyer John S. Warner admitted under questioning, the agency “certainly” had “no specific authorization” to conduct assassinations (Document 7). Warner additionally admitted he was “not clear” that a president had the constitutional authority to order an assassination, though that “might” lie within his powers.

Documents in this electronic briefing book reveal the views on the assassination reports of not only Belin but key members of his staff. At the time, in the spring of 1975, the Senate Select Committee to Study Governmental Operations with Respect to Intelligence Activities (the Church Committee) was just being constituted but the Rockefeller Commission inquiry was already in progress. Days after Church Committee members met with President Ford, press adviser David Gergen advised the president to say nothing about assassinations (Document 1).

The jurisdictional and procedural issues regarding whether to include an investigation of assassination plotting, so far as the Rockefeller inquiry was concerned, were fought out over this same period (Documents 2,3,4,5). White House officials, including panel chairman Rockefeller, continued a rearguard action in opposition, first to covering CIA assassination plots at all, and later to including that material in the Rockefeller Commission report. Belin continued to press for the coverage, took a primary role in interviews the commission conducted for this part of its inquiry, and became the main author of the portion of the report dealing with CIA plotting against Fidel Castro (including Operation ZR/RIFLE). 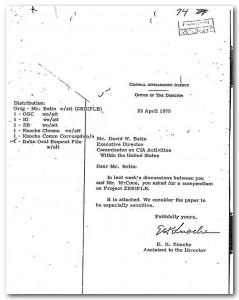 The Rockefeller Commission collected a wide array of evidence, as illustrated by a staff member’s report on what could be learned from the papers of former CIA Director John McCone, and a CIA compendium document on the ZR/RIFLE project (Documents 8, 9, 10).

As of mid-April 1975, Belin expected to have the assassination portion of the panel report complete by the end of the month. He so informed White House officials. However, the CIA dragged its feet on providing materials, and Secretary of State Henry Kissinger, who initially promised cooperation, provided little. Kissinger became a major actor in the struggle to suppress the Rockefeller assassinations report.[iii] When Belin scheduled a press conference to announce the panel’s assassination findings, deputy assistant to the president Richard Cheney and White House Counsel Philip Buchen, citing Kissinger’s concerns, intervened to induce Belin to cancel it.

As the Rockefeller Commission moved toward finalizing its report, panel staff concluded that the assassinations issues were going to be buried. Several recorded their objections to this course (Documents 11, 12). The Rockefeller Commission’s public affairs director, for one, observed that leaving out assassinations would make the report seem like a cover-up and cast doubt on the Commission’s entire project (Document 13). Nevertheless Belin and staff could not prevent determined superiors from holding back the entire subsidiary report that dealt with assassinations.

Meanwhile at the White House, Cheney led the way in “editing” the Rockefeller report—including suppressing the assassinations section. The final draft of the full report contained a brief passage noting that President Ford had asked the panel to investigate the assassination plots after its inquiry began, that the staff had not been able to complete the investigation, and that Ford had then asked that assassinations material be turned over to him. The Cheney edit inserted doubts by adding that it was unclear whether assassinations fell within the scope of the Commission’s mandate, thus resurrecting jurisdictional issues which had previously been resolved. The revised language also reduced President Ford to a bit player—asserting only that he had “concurred” in the panel’s decision to investigate rather than that he had revealed the existence of CIA plotting and then been obliged to modify the Commission’s terms of reference to include an investigation of the matter. White House editors also changed the original text, from indicating that records were still in the process of being turned over to the president, to the statement that it already “has been” done.