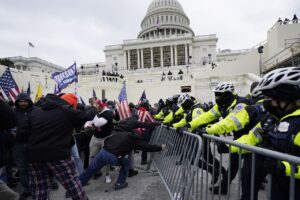 Supporters of then-President Donald Trump try to break through a police barrier Wednesday, Jan. 6, 2021, at the Capitol in Washington.AP File Photo/Julio Cortez

The FBI says Karl Dresch of Calumet in Michigan’s Upper Peninsula was part of the crowd that stormed and breached the U.S. Capitol on Jan. 6 in what some have described as an attempt at domestic terrorism.

If convicted, Karl Dresch could be sentenced to up to 20 years in prison for his role in the Capitol attack by supporters of President Donald Trump that resulted in the deaths of a police officer and four rioters, including one who was fatally shot by Capitol police and three others who died of “medical emergencies.”

It isn’t the first time someone from the Dresch family has made national news.

On April Fool’s Day 2005, FBI investigators removed long-hidden explosive materials that had been stashed in a home previously owned by Nichols’ in Herington, Kansas, in part, based on a tip provided by Karl Dresch’s father.

Retired FBI spokesman and Special Agent Jeff Lanza remembers arriving to the scene and relaying what few details were available to curious reporters and TV news crews waiting nearby.

“It would be an amazing coincidence that the same family would have information pertaining to two very, very important and historical events in our county’s history,” Lanza said when contacted by MLive this week.

By 2005, Nichols had been convicted and sentenced to life in prison, where he remains today, for his role in the April 19, 1995 Oklahoma City bombing that killed 168 people. His co-conspirator, Timothy McVeigh, died by lethal injection four years prior.

“There was some lead that there was either weapons or materials related to weapons, like blasting caps and things like that,” said Lanza, who now earns a living giving speeches about cybersecurity and identity theft protection.

“It was just a couple weeks shy of the 10th anniversary of the bombing, so making that discovery was not only interesting but also coincidental on timing,” he said. “I know stuff was found under a foot or so of gravel that was under the stairwell. It was an area that wasn’t searched during multiple searches of Nichols’ house.”

The tip that led FBI agents to bomb-making materials beneath Nichols’ house in central Kansas came through Stephen Dresch, who learned about it from imprisoned mobster Anthony Scarpa Jr., a high-ranking member of the infamous New York City Colombo crime family.

Scarpa Jr. told Dresch he learned the information during a conversation with Nichols. Scarpa Jr. and Nichols were both serving federal prison sentences in Colorado, Scarpa Jr. for conspiracy to murder and drug trafficking.

Nichols told the Oklahoman newspaper weeks later that rumors he was plotting a second terrorist attack using the explosives on the 10th anniversary of the Oklahoma City bombing were false.

Stephen Dresch, who died at 62 in 2006, worked as an international, for-hire — and sometimes pro bono — investigator.

He developed a relationship with Scarpa Jr. while investigating the mafioso’s hit-man father, Gregory “Grim Reaper” Scarpa Sr., said Angela Clemente, a forensic intelligence analyst and congressional consultant who worked with Stephen Dresch at the time.

Muskegon-born Clemente, who now lives in New Jersey, teamed with Dresch in 1998 to investigate an FBI agent and mob informant handler, Roy Lindley DeVecchio, who would eventually be indicted on allegations that he protected and sometimes gave confidential information to Scarpa Sr. that the mobster used to commit at least four murders in the 1980s.

The case was later dismissed, but Stephen Dresch and Clemente developed a strong bond through their work. She compared Stephen Dresch to a father figure.

Stephen Dresch earned a Ph.D. in economics from Yale in 1970. After working as a professor at universities, including Yale and Rutgers, he became a dean and professor of Michigan Technological University’s School of Business and Engineering Administration in Houghton, near Calumet, between 1985 and 1990.

There, he did some of his first freelance detective work, uncovering financial corruption stemming from university fundraising efforts. He resigned in 1990 and embarked on a short-lived political career, serving in the state House from 1991 to 1992 as a Republican. Subsequent campaigns for U.S. House and to regain his state House seat failed.

He served on the Board of Scholars for the Mackinac Center for Public Policy, which describes itself as a nonprofit research and educational institute aimed at advancing free markets and limited government, and he was the focus of a documentary named “The Anthrax War,” which explored his international investigation into 2001 anthrax attacks across the globe.

“A Republican-leaning libertarian from the notoriously independent-minded upper peninsula of Michigan … Dresch wore the physical trappings of an iconoclast,” a description of Stephen Dresch on the documentary website reads.

By the time filmmakers Bob Coen and Eric Nadler began working with Dresch, “age had bleached his full beard and long hair; years of chain smoking had stained his fingers and teeth.”

“He looked, many would comment, more like the Unabomber than a tireless crime buster who harried the FBI to catch America’s most-wanted. But even in the last years of his life there was an unquenchable youthful light in his eyes — a ray of determination to somehow lessen the badness caused by the overwhelming abundance of malefactors.”

The description of Dresch said he “gave off an aura of mild wackiness and might be written off as a ‘conspiracy nut,’” if he didn’t have so many facts to support his claims.

Clemente said Dresch adored his wife, Linda, whom he married at age 19. Oddly, she said, she doesn’t recall him mentioning his son Karl Dresch, who would have been about 18 when they first spoke.

Stephen and Linda Dresch had four children together, including another son and two daughters.

Clemente said Stephen Dresch was a big proponent of government transparency and often said, “sunlight is the best disinfectant for corruption.”

His years of fighting for truth and justice, often against institutions of power, left Stephen Dresch drained and dejected near the end, Clemente said.

“Before he died, he felt that no matter what we do (to fight against corruption), it’s not going to get anywhere,” she said. “I think he had kind of given up and decided the system is just too bad and us trying to correct it is not working. I think he felt kind of tired.”

She described him as politically neutral, “not a conservative and not a liberal,” and said he would never have condoned the violence his son is accused of participating in at the Capitol.

“Right from the start of our acquaintance I have been continuously impressed by Stephen’s intellectual capabilities, breadth of knowledge, personal courage and, above all, his profoundly patriotic attachment to the ideals of the American Revolution,” former Michigan Tech Professor Karol I. Pelc said in one tribute published by the Mackinac Center about Stephen Dresh following his death in 2006. “I will forever remember the stimulating discussions with Stephen ranging in their scope from philosophy to economics and politics.”

Clemente said Stephen Dresch was diagnosed with lung cancer and died soon afterward; she offered him one of her lungs for transplant, she said. He declined.