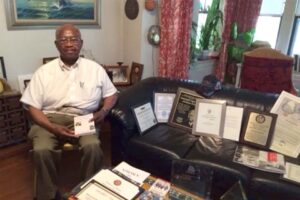 Abraham Bolden at his South Side home in 2016. Mary Mitchell/Sun-Times file photo

WASHINGTON — President Joe Biden has granted the first three pardons of his term, providing clemency to a Kennedy-era Secret Service agent convicted of federal bribery charges that he tried to sell a copy of an agency file and to two people who were convicted on drug-related charges but went on to become pillars in their communities.

The Democratic president also commuted the sentences of 75 others for nonviolent, drug-related convictions. The White House announced the clemencies Tuesday as it launched a series of job training and reentry programs for those in prison or recently released.

Many of those who received commutations have been serving their sentences on home confinement during the COVID-19 pandemic. Several were serving lengthy sentences and would have received lesser terms had they been convicted today for the same offenses as a result of the 2018 bipartisan sentencing reform ushered into law by the Trump administration.

“America is a nation of laws and second chances, redemption, and rehabilitation,” Biden said in a statement announcing the clemencies. “Elected officials on both sides of the aisle, faith leaders, civil rights advocates, and law enforcement leaders agree that our criminal justice system can and should reflect these core values that enable safer and stronger communities.”

Those granted pardons are:

— Abraham Bolden Sr., 86, the first Black Secret Service agent to serve on a presidential detail. In 1964, Bolden, who served on President John F. Kennedy’s detail, faced federal bribery charges that he attempted to sell a copy of a Secret Service file. His first trial ended in a hung jury.

Following his conviction in a second trial, key witnesses admitted lying at the prosecutor’s request. Bolden, of Chicago, was denied a retrial and served several years in federal prison. Bolden has maintained his innocence and wrote a book in which he argued he was targeted for speaking out against racist and unprofessional behavior in the Secret Service.